In our last blog post we covered the famed Dittany of Crete. This week we’re discussing another Mediterranean magical ingredient also native to Crete: Labdanum. Labdanum is a dark semi-solid oleoresin produced by evergreen shrubs in the genus Cistus, the rock-roses (generally either C. ladaniferus in the western Mediterranean or C. creticus in the east). This resin is exuded from glandular hairs on the leaves of the plant in the summer to protect the plant’s photosynthetic machinery from oxidative stress caused by the intense Mediterranean sun. 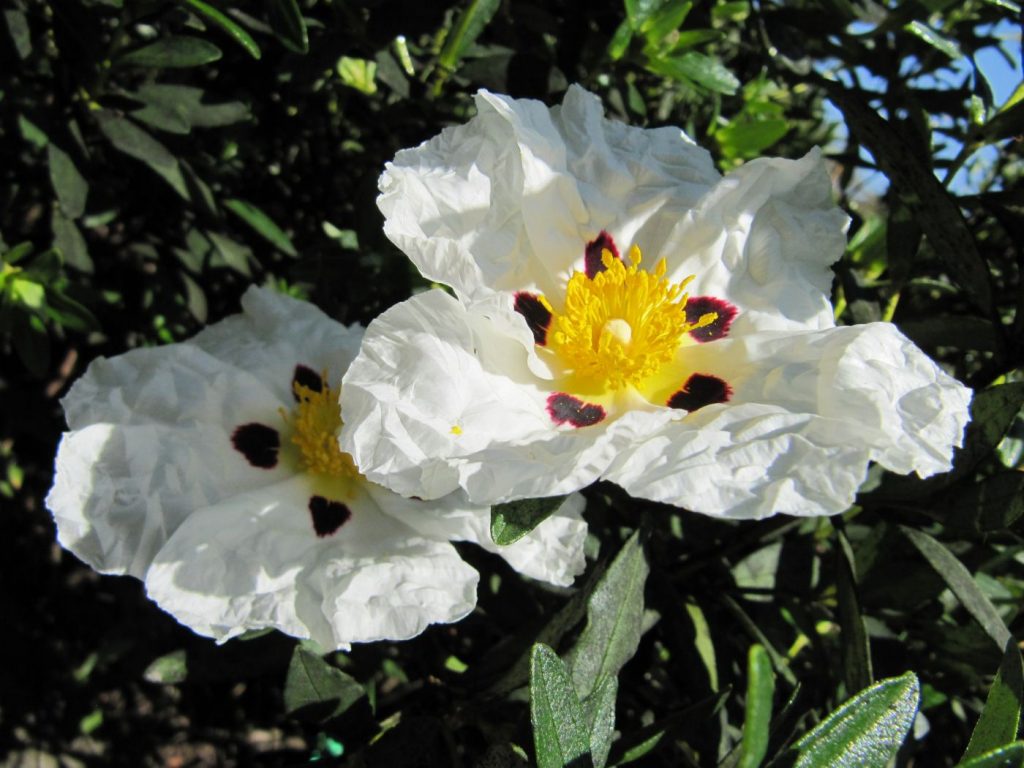 There are two traditional ways the resin is gathered. The first is by combing it from the hair of goats who have browsed and grazed among the shrubs. Herodotus, writing in the 5th century BCE, tells us in his Histories:

Ledanum, which the Arabs call ladanum, is procured in a yet stranger fashion. Found in a most inodorous place, it is the sweetest-scented of all substances. It is gathered from the thighs and beards of he-goats, where it is found sticking like gum, having come from the bushes on which they browse. It is used in many sorts of unguents, and is what the Arabs burn chiefly as incense.

The second traditional method of harvest, and one that’s still employed in the eastern Mediterranean (especially the island of Crete), is to gently beat the bushes with a lambadistrion, a sort of rake with leather thongs instead of teeth. It is here we discover an interesting possible symbolic key in the Western Mystery Tradition. Early 19th century Egyptologists averred that the beards worn by pharaohs in emulation of the resurrected Lord of the Dead, Osiris, were in fact the beards of goats smeared with labdanum resin. Further, some of them suggested that the ritual flail of Egypt could have two cultural origins: the winnowing flail used to beat the chaff from the grain *and* the instrument used to collect labdanum from the Cistus bush. In effect, the tool symbolizes that which brings forth the staple of life by separating the wheat from the chaff and that which brings forth the indwelling divine substance which marks sacred kings. This flail was one of the tools used by the Hermetic Order of the Golden Dawn in their syncretic Egyptian ceremonial magic system, and from there, probably entered the toolbox of British Traditional Wica as the scourge.

To return to labdanum, as the quote from Herodotus given earlier suggests (“used in many sorts of unguents”), the resin was used in many beauty products of the ancient world. Many ancient writers call labdanum the “perfume of Arabia”. The ancient Egyptians also used labdanum in a number of their preparations as did the Etruscans and the Greeks. Diosciordes lists labdanum among the ingredients of the Royal Unguent and so does Pliny the Elder. Cistus bushes also grow on the island of Cyprus (Kypris) where there was a large temple to Aphrodite in the ancient world that included a perfumery, and the resin was used in their blends and burned as an offering at her altars.

In addition to offerings to Kypris, the goddess who delights in the pleasures of the night, labdanum was also included in another famous incense offering – it is likely the mysterious ingredient Onycha in the sacred Ketoret incense of the Hebrews. The book of Exodus, chapter 30, gives the formula as follows:

And the LORD said unto Moses, Take unto yourself sweet spices, stacte, and onycha, and galbanum; these sweet spices with pure frankincense: of each shall there be a like weight: And you shall make it a perfume, a confection after the art of the apothecary, tempered together, pure and holy: And you shall beat some of it very small, and put of it before the testimony in the tabernacle of the congregation, where I will meet with you: it shall be unto you most holy.

The word onycha here is Greek, meaning “nail” and derived from onyx (the stone) and was chosen to replace the original Hebrew word shecheleth, related to the Syriac word shehelta meaning “tear, drop, distillation, exudation”. This word is rendered in the Arabic as ladana – labdanum. Further, biblical scholars and linguists suggest that all the words used are poetic descriptions of Cistus in some way: nail for the petals of the plant or words referencing the blackness of the dark resin.

As a powerful scent used in so many preparations, you may find yourself wondering what it smells like. Labdanum has a complex scent, described by perfumers as sweet, warm, basalmic, and floral. It has notes of the richness of leather and the sweet earthiness of musk and vanilla. It is said to be reminiscent of Ambergris, a famous and quite rare perfume ingredient which comes from the digestive tracts of sperm whales. In fact, labdanum is often used as a substitute for this rare ingredient, which is considered an aphrodisiac amongst occultists. Finally, labdanum is one of the important scents in the famous French perfume family known as Chypre, named for the ancient perfumery of Aphrodite on Cyprus. François Coty created the first modern chypre fragrance in 1917, with labdanum, oakmoss, florals and bergamot. The scent was highly popular, and even ended up in Hoodoo, where it was said to bring fast money and fast women.

So, what then are we to make of all this material? To what uses can a modern practitioner of the occult arts put this highly fragrant resin exuded in the burning summer sun of the Mediterranean? Synthesizing, we find an association with goats and possibly the flail/scourge, with sensuous Venus, the sacred incense of YHVH, and with the perfumers of la Belle Epoch in France. I suggest, that taken altogether, Labdanum would seem to be ideal for blends used in sex magic, diabolic work, and the black mass. One could see the biblical scapegoat, sent into the desert as a sacrifice to Azazel, his thighs and beard smeared with the black resin of labdanum, the same fragrance used to perfume the occultists and bohemians at the turn of the century.

Though Huysmans’ scandalous 1891 novel “Là-Bas: A Journey into the Self” gives the incense for the black mass as “De la rue, des feuilles de jusquiame et de datura des solanées sèches et de la myrrhe; ce sont des parfums agréables à Satan, notre maître!” [Of (Syrian) rue, of the dried leaves of henbane and thornapple in the nightshade family, and of myrrh; these are pleasing perfumes to our lord Satan.], this blend lacks a sort of diabolic decadence, which could be supplied by the complex sensuous fragrance of labdanum.

Of course if summoning demons and profaning the rites of the Christian church isn’t your bag, labdanum is appropriate for other rites too—the summer moonlit rites of the Wica, to accompany paens sung to Babalon, ritual attempts to woo the Bright Lady of the Hollow hills, to perfume Dionysian revels. The scent of Labdanum calls for uses that are sensual and subversive, wild and free, glamorous and embodied.