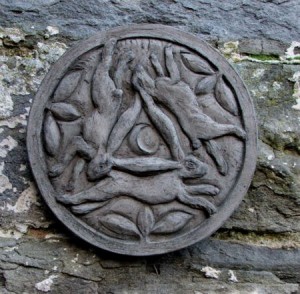 The above symbol, known as the Tinners’ Rabbits or the Three Hares, is the one we adopted for our personal working group. This symbol is associated with the British west country, particularly in churches in the regions of Dartmoor and Devonshire, but also found in other areas in Europe and as far away as China. It was once adopted as a mark for tin mined in Devonshire. We have a special affinity for the magic and folklore of the West Country of Britain, particularly Somerset and Devon, so this symbol seems fitting.

Though hares are not native to the eastern United States, they have a close cousin in the eastern cottontail rabbit. When Tom and I began working traditional witchcraft, we saw rabbits everywhere; we surprised them when skulking out to working sites and had dreams and visions of white hares running through moonlit meadows.  Male rabbits are known as “bucks”, while male hares are called “jacks”— names which (at least poetically) have a long association with the nameless art.  In addition a “malkin”  (as in Greymalkin from Macbeth) could refer to either a cat or a hare.

Indeed the lagomorph (the scientific term for a rabbit or hare) has an ancient history with witches. In 1662, Isobel Gowdie, a young housewife from the highlands of Scotland, confessed that her coven possessed the ability to transform into hares by repeating the following charm three times:

I shall go into a hare,
With sorrow and sych and meikle care;
And I shall go in the Devil’s name
Ay while I come home again.

To return to their human form they said,

Hare, hare, God send thee care.
I am in a hare’s likeness just now,
But I shall be in a woman’s likeness even now.

The belief in the power of witches to change their shape into hares and go roaming about at night dates from much earlier. In fact, Giraldus Cambrensis, writing almost 500 years earlier in the Topography of Ireland reported “It has also been a frequent complaint, from old times as well as in the present, that certain hags in Wales, as well as in Ireland and Scotland, changed themselves into the shape of hares…” Remnants of this belief can still be found in the numerous folk stories about hares that were shot at night to find a local woman with a shoulder wound the next morning or parsons surprising a coven of witches and finding hares in their place the next instant.

In addition with being associated with witches, hares and rabbits are associated with the lunar cycle, fertility, longevity, and rebirth. They’re seen as moving easily between this world and the other (think of the White Rabbit in Alice in Wonderland). We associate the rabbit or hare with the eastern road of earth and the tides of spring and dawn and the bright queen of Faerie. In addition, the ears of the creatures in the Tinners’ Rabbits form the triangle of manifestation within the ring of art, which gives form to force.

Lastly, Marc Michael Epstein writing in “Dreams of Subversion in Medieval Jewish Art and Literature” has this to say about the medieval image of the hare: “The beastiarists deemed the hare’s sex to be ambiguous, and its mode of reproduction strange. They included the hare in a group of several beasts that they asserted had been declared unclean in the Mosaic law because of their alleged sexual deviance . . . Moses Azikri (1533-1600) wrote that one who is involved in homosexual relations is reincarnated as a hare.”

(“Personally I think it makes a very lovely transmutation.” )

As queers, people of the earth, and moon-mad witches, “we shall go into a hare”….