One of Tom and my goals for Otherworld Apothecary is to provide rare and potent magical herbs and resins for practitioners. Pursuing this goal prompts us to undertake sojourns and hikes to ethically wildharvest local plants, to grow others in our gardens, and also to import quality materials from exotic lands. Last week, we got a shipment of ethically harvested Dittany of Crete (Origanum dictamnus) directly from Crete.

Dittany of Crete is a species of oregano which only grows wild on the mountains and cliffs of the island of Crete. As such, it’s fairly rare and not often found in commerce. Though it can be grown in warm climates (Tom and I have given it a try ourselves), the yield is not very high. We have been to a number of metaphysical shops and seen herb merchants selling marjoram or oregano labeled as Dittany of Crete instead. But the true plant is fairly distinctive. Dittany of Crete may be easily recognized both by the characteristic woolly white-grey hair on its stems and round leaves and the fairly bright pink-purple bracts that surround the flowers during the growing season. Perhaps due to this beautiful plant’s rarity it’s developed quite a large magical reputation.

In the ancient world, Dittany of Crete was considered a potent healing herb. It was said that the wild goats that lived in the mountains of Crete sought out the herb to heal themselves of arrow wounds. Virgil relates this bit of lore in the Aeneid Book XII when the goddess Venus heals the wounded hero with the plant:

Hereupon Venus, smitten by her son’s cruel pain, with a mother’s care plucks from Cretan Ida a dittany stalk, clothed with downy leaves and purple flowers; not unknown is that herb to wild goats, when winged arrows have lodged in their flanks.

The “father of modern medicine”, the Greek Hippocrates, prescribed the herb as a panacea, especially good for digestive complaints and healing wounds.

The Cretan name for this plant is Erontas “love herb”. Cat Yronwode, folk magic collector and hoodoo practitioner, was taught by a folk magician in the 1960’s that Cretan women made sorcerous love magic with the herb. There’s romantic folklore that states that young men, smitten by love, would climb the dangerous cliffs and steep rocky mountains of Crete to obtain a bouquet of the flowering herb to give to their sweethearts to prove their love, bravery, and physical prowess. Thus, it developed a use in love magic, particularly as an aphrodisiac fed to a lover to increase their passion for the magician.

But perhaps the bulk of Dittany of Crete’s magical reputation comes from a branch of western esotericism formed New York City in 1875, the Theosophical Society. The Society was formed by a number of leading occultists, including the controversial Helena Blavatsky, and was part of a web of occultists that included the Spiritualists, the Hermetic Order of Light, the Hermetic Order of Luxor, the Mesmerists, various Rosecution groups and others. The contributions of the Theosophists to the history and practice of modern occultism could be a book in and of itself (and will probably be the subject of another blog post), but include the The Hidden Masters, a focus on Universalism, and the notion of a recurring enlightened teacher incarnating through the ages. But here I will constrain myself to their use of Cretan Dittany, which they consider a powerfully magical plant.

In The Theosophical Glossary, Blavatsky writes:

“The Diktamnon is an evergreen shrub whose contact as claimed in Occultism develops and at the same time cures somnambulism. Mixed with Verbena it will produce clairvoyance and ecstasy. Pharmacy attributes to the Diktamnon strongly sedative and quieting properties. It grows in abundance on Mount Dicte in Crete and enters into many magical performances resorted to by the Cretans even to this day.”

And, Blavatsky gives a more mytho-poetic treatment in Isis Unveiled:

“As the sun, what better image could be found for Jupiter emitting his golden rays than to personify this emanation in Diana, the all-illuminating virgin Artemis, whose oldest name was Diktynna, literally the emitted ray, from the word dikein. The moon is non-luminous, and it shines only by the reflected light of the sun; hence, the imagery of his daughter, the goddess of the moon, and herself, Luna, Astarte, or Diana. As the Cretan Diktynna, she wears a wreath made of the magic plant diktamnon, or dictamnus, the evergreen shrub whose contact is said, at the same time, to develop somnambulism and cure finally of it; and, as Eilithyia and Juno Pronuba, she is the goddess who Æsculapian deity, and the use of the dictamnus-wreath, in association with the moon, shows once more the profound observation of the ancients. This plant is known in botany as possessing strongly sedative properties; it grows on Mount Dicte, a Cretan mountain, in great abundance; on the other hand, the moon, according to the best authorities on animal magnetism, acts upon the juices and ganglionic system, or nerve-cells, the seat from whence proceed all the nerve-fibres which play such a prominent part in mesmerization. During childbirth the Cretan women were covered with this plant, and its roots were administered as best calculated to soothe acute pain, and allay the irritability so dangerous at this period. They were placed, moreover, within the precincts of the temple sacred to the goddess, and, if possible, under the direct rays of the resplendent daughter of Jupiter — the bright and warm Eastern moon.”

In essence, the Theosophists considered it sacred to the goddess of the moon, and a powerful aid to achieving trance states.

This usage, in turn, impacted the magician Aleister Crowley. In many of the journals which detail his workings, he mentions using Dittany of Crete as an incense to help him obtain evocation to visible appearance, as a boost to his own spirit sight as well as source of magical power for the spirit. It is in one of these workings where he and George Cecil Jones are attempting to manifest the Goetic Demon Buer (published in Chapter 57 of Magic Without Tears) where he says “we decided to use this [Dittany of Crete], as H.P.B. [Helena Blavatsky] once said that its magical virtue was greater than that of any other herb”.

Modern practice mostly continues upon these foundations laid by Crowley. Dittany of Crete is used as a herb to promote spirit sight. It is added to animating potions for crystal balls and scrying mirrors and burned to help spirits manifest in the dense white smoke that arises. Paul Huson’s Mastering Witchcraft suggests Dittany of Crete be mixed with the incense where “a materialization is required in the operation”. We include it in our Visions Incense and our To Call Spirits Incense for this purpose, and in various other blends to promote clairvoyance and ecstatic trance. Lastly, Janet and Stewart Farrar, drawing on the association of the herb with the wild goats of the ancient world, include Dittany of Crete in their incense to the Goat-foot God, the Piper at the Gates of Dawn, and this recipe has been shared widely amongst modern witches.

All told, Dittany of Crete is a potent ally to magical practice and we’re excited to be able to offer it ethically harvested directly from its native hillsides of Crete. 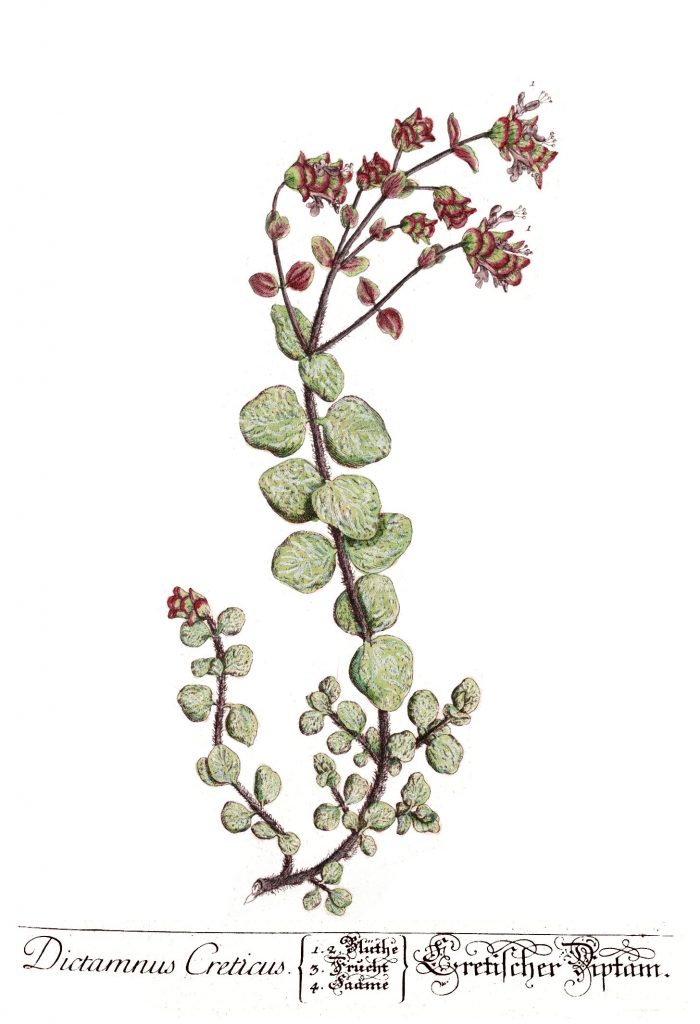 2 thoughts on “On Dittany of Crete”