Recently one of our students asked us about correspondences for planetary ruler and element for herbs and resins. In the process of explaining where those come from and the underlying theory for deriving these correspondences, Tom and I took the opportunity to revisit and update the ones listed for the botanicals on the Otherworld Apothecary website. We thought we’d write an article to share this information with you, dear reader, as well.

Like many occultists when they first start learning magical herbalism, Tom and I supplemented our early botanical learning, gleaned from gardens and woodland wanderings as young witchlings, with the magical information found in the one of most common books on the subject at the time: Cunningham’s Encyclopedia of Magical Herbs. Though not without its flaws, it is a thorough introduction to magical herbalism, and for every entry Cunningham gives planetary and elemental correspondences. But where do these come from? Why do some herbal sources disagree on these associations?

Planetary and Elemental correspondences arise from classical medicinal herbalism, where the practice of herbalism was coupled with medical astrology– a system which started in ancient Greece and continued through the medieval period into early modern medicine. In this philosophy, all herbal medicines and remedies used in treatment have their own inherent Nature and Temperament reflected in the traits of the plant. They also have, through these qualities and virtues, certain astrological affinities with specific planets and signs of the zodiac. In essence, a plant’s astrological and elemental attributes are a sort of filing system to categorize their specific Natures and their action upon the human physium.

Perhaps the most famous practitioner of this sort of herbalism was Nicholas Culpeper, an early 17th century English botanist, herbalist, physician, and astrologer. Culpeper revolutionized medicine through the development of a sophisticated system of herbal-astrological medicine, applying reason and the scientific method to study, offering cheap and easy herbal treatments, and by attempting to educate laypersons about their health through the publication of his books. Of note is his popular and widely available herbal, “The English Physician or The Compleat Herbal”, which has been an influential text for Tom and me and countless other practitioners. Our herbal correspondences are based upon his foundation.

The planetary association of herbs arises from two theoretical underpinnings: plant traits and medicinal action on the physium. As mentioned above, a plant’s astrological correspondence is a way to categorize its specific Nature, which is reflected in the traits of the plant, including growth form, color of its flowers, leaf shape, scent, taste, reproductive structures, habitat and other characteristics of note. This is also coupled with the effect that the plant has upon the human body and used to assign a particular planetary affiliation.

For example, evergreen herbs like rosemary, whose expression of the Life Force is steady and constant like the Sun, are considered solar, as are plants that possess yellow flowers like calendula or those that look like the sun like eyebright. Medicinal actions that are solar in nature include: strengthening the heart (associated with the astrological sign of leo, and ruled by the sun), bringing a feeling of warmth and ease and well-being, and stimulating or clearing the eyesight. So, for instance, St. John’s Wort (Hypericum perfoliatum) blooms around midsummer, has flower buds which produce an amber red fluid, has bright yellow solar flowers and is used to dispel anxiety and promote feelings of wellbeing, thus it is an herb of the sun par excellence.

Where a plant grows is also a trait that can also be an indication of its planetary nature. For example, herbs that grow in waste places like graveyards and ditches are generally plants of Saturn. Culpeper’s entry on Henbane from The Compleat Herbal states: “I wonder how astrologers could take on them to make this an herb of Jupiter; and yet Mizaldus, a man of a penetrating brain, was of that opinion as well as the rest; the herb is indeed under the dominion of Saturn, and I prove it by this argument: All the herbs which delight most to grow in saturnine places, are saturnine herbs. But Henbane delights most to grow in saturnine places, and whole cart loads of it may be found near the places where they empty the common Jakes, and scarce a ditch to be found without it growing by it. Ergo, it is an herb of Saturn.” That henbane is also a poisonous herb only adds to its Saturn nature.

The elemental correspondences of herbs arise from humoral theory–the four humors or temperaments are elemental in nature and are a combination of two different axes: Hot vs. Cold and Wet vs Dry. Here are some action keywords that describe the differences. 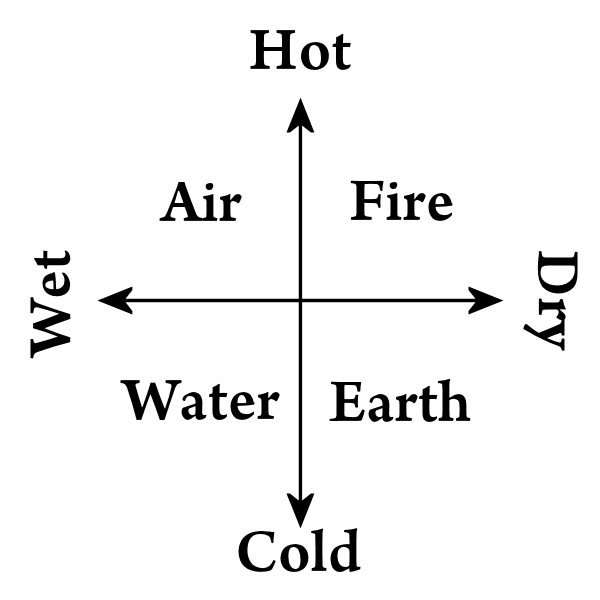 To determine elemental attributes under this system, one considers the plants Nature with regard to the two axes. For example, patchouli is exciting and activating and so is “hot’, and also is expansive and diffusive into a space, and so it is “wet”. Thus, even though it has an earthy smell, patchouli’s nature is of elemental air. This is also reflected in patchouli’s magical use—it’s used in money magic to increase flow and commerce (an air trait), in lust magic to increase and inflame passions (like air on a flame), and also in divination and sight blends (also an air quality).

Myrrh is another good example. It’s sedating; if you’ve ever been in a room clouded with myrrh smoke you know the feeling of heaviness that it causes. Thus it’s “cold” on the hot vs. cold axis. It’s also focusing and constricting and drying (used medically to dry up wounds), so is “dry”. Thus myrrh’s nature is cold and dry–elemental earth. While it is used in trance (often thought by magicians to be a “water” trait) myrrh’s nature is of earth, and is used for “earthy” necromancy, preservation and protection.

And so on, for each we considered.

In many cases our judgement agrees with Culpeper and Cunningham, and in other cases we differ, as is to be expected given different people working in different places and times and giving different weight to the various aspects of the plant under consideration.

Initially, we included the planet and element as a sort of key or guide on the herb labels for those shopping in our festival booth. They then transitioned over to the website since they were already in the database, where they persist (along with an embarrassingly large number of the original label descriptions!). We feel these categorizations are useful to occultists for a variety of reasons, from making fluid condensers to gaining a richer understanding of the energetic subtleties between similar aromatic resins. We hope you are able to make use of them, and that this insight into our process aids in that as well.

One thought on “On Herbal Correspondences”