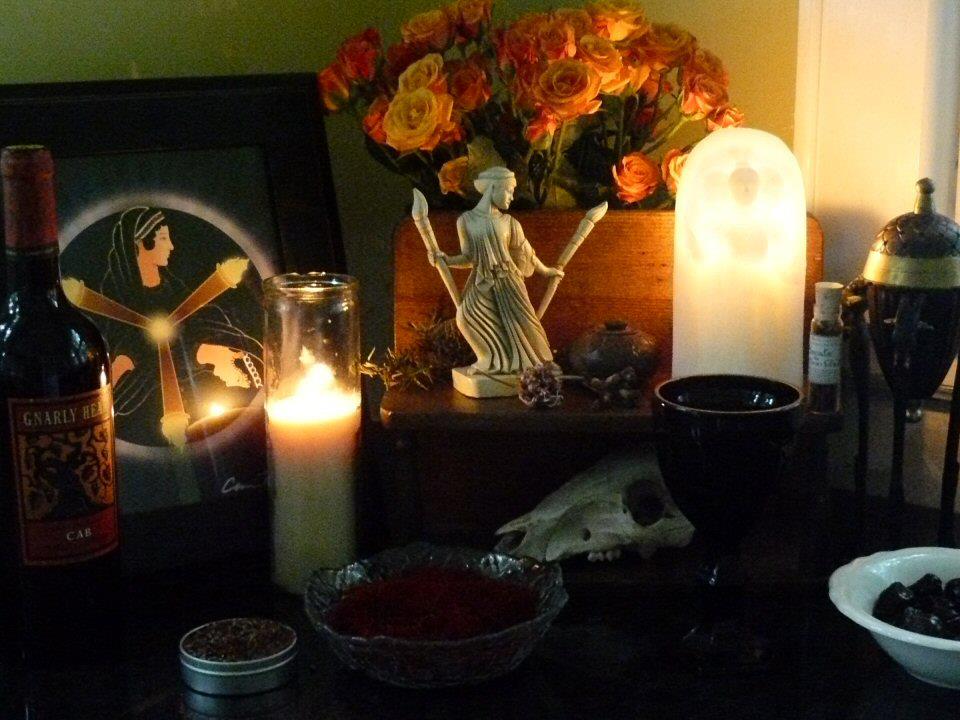 This year, the Feast of Hecate, which we’ve adopted into our own craft, falls on the Dark Moon and the peak of the Perseid meteor shower. Several years ago, we published an article on Hecate and the origin of her festival on August 13. In the early 2000’s this festival was commonly ascribed to an aspect of Hecate known as the Lady of Storms with some notion that part of the reason for the festival was to propitiate Her to protect the harvest. Our work and experiences with Our Lady of Night have changed and evolved since that time, and as the feast date continues to grow in popularity, we thought we’d revisit the article.

There’s not much in the classical literature about [Hecate] being associated with storms, beyond that Zeus ‘gave’ her power over all realms. Her dominion here instead seems to grow out of the “dark and stormy night” image that she developed during the middle ages. There is, however, widespread belief among modern worshipers that she has a feast day on August 13 to protect the crops from violent storms.

Wikipedia is perpetuating this belief, citing Leo Ruickbie’s “Witchcraft out of the Shadows” (2004). In a side-box he claims that the ancient Greeks observed a feast day on August 13 in which Hecate was propitiated to not send storms to destroy the growing crops. Ruikbie, in turn, cites his source as Diane Stein’s “The Goddess Book of Days” (Llewellyn, 1997). Her original calendar was published in 1988 and does not give a primary source.

Various Internet sites claim that this occurred in the House of Storms and Fertility, that it was a Festival to Hecate of the Moon, or that it was part of the Festival of Hecate and Artemis. Mikalson, in The Sacred and Civil Calendar of the Athenian Year lists for Metageitnion 16 that “the sacrifical calendar of the deme Erkhia prescribes sacrifices on this day to Kourotrophos and Artemis Hekate.” Metageitnion is the Attic lunar month that lines up with late July/August. The 16th would be two days after the full moon (July 31, this year). Unfortunately, I cannot find what occurred during the rite (if anything specific at all). Still, this doesn’t explain why August 13 was chosen, fixed as it is to the Roman solar year instead of the lunar calendar used by the ancient Greeks.

Also, there is never any mention as to why Hecate would be called to protect crops (as opposed to children and mothers-to-be). According to Brumfield in his book The Attic festivals of Demeter and their Relation to the Agricultural Year (1976), during the time of the year we call August, the grain harvest had been completed and the grape harvest would not have begun until September. August was a lull in the agricultural year and nothing needed to be protected from violent storms.

A few clues come to light when we stop looking for ancient Greek sources. In Rome, The Festival of Torches was held on August 13, called the Nemoralia. In it, woman would walk from the city of Rome carrying torches to a lake sacred to Diana where they would offer their petitions. There was a strong conflation between Artemis and Hecate in Greece, with Hecate taking on a number of Artemis’ roles. Diana and Hecate were also conflated some, but typically maintained separate spheres of influence. Still, this seems to be a likely source for fixing the ritual on that particular date.

Additionally, in 1986 a ritual performed on August 14, 1985, was published in Circle Network News which invoked Hecate Chthonia and incorporated a Hecate Supper. A web page by that author claims that a similar ritual incorporating much of the same text was performed at the MoonStone Circle of the Aquarian Tabernacle and published in Panegyria on August 13, 1988. The original date it was performed, August 14, 1985, was a dark moon, which has been a sacred time for Hecate since classical times. The other date, though, perhaps inspired by Stein’s recently published Goddess Book of Days, was a waxing gibbous.

None of this explains a connection with storms or harvests, however. This strikes me as a purely Neopagan phenomenon rising out of widespread observance of harvest-type rituals during early August, the most common being the Celtic feast of Lughnasadh.

Eight years later, we still suspect the modern Feast of Hecate held on August 13 comes from the Nemoralia, the festival of Diana held in the groves at Nemi. This cult has a long association with modern paganism, being the inspiration and central study in Sir James Frazer’s The Golden Bough which, in turn, formed a pillar of the neo-pagan movement.

The goddess Diana as she was worshiped in the groves as Nemi possessed a triple form, not unlike the triform figure of Hekate that is familiar to many modern witches. One of the three was known classically as Hecate or Proserpina, something which has troubled me. Why is a Latin Goddess being called by the name of a different Greek goddess? Is it syncretism, like the conflation of Artemis and Hecate, and Artemis and Diana. CMC Green in Roman Religion and the Cult of Diana at Aricia offers this plausible explanation: “The identification of Diana with Hecate (a Greek name) has been made unnecessarily complicated. Diana the Huntress was identified with the moon, as Apollo was with the sun. As the moon grows dark once a month it is inevitable that a moon-goddess will have some part of her identity located in the underworld. Hecate is simply the Greek name for that part of her identity.” The names Hecate and Proserpina were also likely considered safe substitutes for the true name of the Underworld Moon.

There are numerous classical references to this association. One of Horace’s Odes mentions Diva Triformis, and Virgils Dido calls on “tergeminanque hecaten, tria virginis ora Dianae.” Isodore of Seville writing in the first century explains: “Concerning which Virgil writes..the three faces of the virgin Diana, because the same goddess is called Luna, Diana, and Proserpina”. This tripartate Diana persisted through the centuries, showing up in triple form in Chaucer’s Canterbury Tales and John Skelton’s Garland of Laurels in 1523 (“Diana in the leaves green, Luna that so bright doth sheen, Persephone in hell”). As mentioned previously, her cult instigated James Frazer’s life work The Golden Bough and influenced Robert Graves’ The White Goddess, through which the concept of the triple goddess was introduced to modern Wicca.

To return to the August festival which honored the three-fold goddess, Green’s translation of one of the poems composed by the Latin poet Statius in the 1st century CE is appropriate:

It is the season when the most scorching region of the heavens takes over the land and the keen dog-star Sirius, so often struck by Hyperion’s sun, burns the gasping fields. Now is the day when Trivia’s Arician grove, convenient for fugitive kings, grows smoky, and the lake, having guilty knowledge of Hyppolytus, glitters with the reflection of the multitude of torches; Diana herself garlands the deserving hunting dogs and polishes the arrowheads and allows the wild animals to go in safety, and at virtuous hearths all Italy celebrates the Hecatean Ides.

Finally, Green (really, just go pick up her book) suggests that the festival lasted 3 days, starting with her decent to the underworld on the Ides (August 13th) where she would be known as Hecate, and culminating on the 15th of August when she ascended as the Queen of Heaven, the full moon. Incidentally the 15th is celebrated as the Feast of the Assumption of Mary, Queen of Heaven, in the Christian church, who may have adopted this (non-infernal) part of the festival.

Today, the August 13 Feast of Hecate has grown immensely in popularity among modern pagans, and includes many individual observances as well as larger public rites such as Hecate’s Feast hosted by the Temple of Witchcraft. We conclude that the Hecate honored at these rites isn’t necessarily the Greek goddess of boundaries or Lady of Storms, but they are an indirect continuation of rites to the dread face of Diva Triformis as goddess of night, the queen of the dark moon roaming the underworld. This year, in addition to feasting on delicious Mediterranean food and wine, we’ll celebrate by giving offerings at the crossroads under the shower of falling stars and ritually blending an offertory incense for use in the coming year, Hecate the Saffron Clad. From the classical torch-lit rites within the grove at Nemi to modern observances by pagans and witches, August 13 brings together all those who form the conclave of the goddess of night. May she bless you all.

3 thoughts on “The Origins of the Feast of Hecate”