Angelica is a tall, aromatic, perennial herb with a thick, fleshy taproot and hollow stems. The bright green leaves are divided into leaflets, and large flat heads (umbels) of flowers bloom in mid to late summer. The plant is in the Apiaceae–the carrot family–along with fennel, parsley, anise, caraway, coriander, chervil, carrots, parsnips, queen anne’s lace , cowbane, and poison hemlock, though it’s scent is completely different from all those cousins. The scent of angelica could be described as rich, earthy, and musky. The species people are generally referring to when they say angelica (Angelica archangelica) is native to northern Europe (Finland, Sweden, Denmark, Norway etc), Russia, and the mountainous regions of Germany, Poland and Romania–basically the cold steeps. Interestingly, there’s even an endemic species in the high elevation mountains of the southern Appalachians–filmy angelica (A. triquinata).

If you’ve ever seen angelica blooming in the summer, you know that it’s highly intoxicating to insects; the flower heads are usually covered in a bunch of yellow jackets and native bees. Perhaps seeing it covered in stinging insects is what prompted it to be named Angelica archangelica, after the Archangel Michael of the flaming sword, who in angelic lore is seen as a protector and the leader of the army of God against the forces of evil. The association between Michael and the plant supposedly goes back to the 14th century, when angelica was pointed out to the physician Mattheus Sylvaticus by the archangel as a medicinal plant which could combat the plague. The Archangel Michael is often portrayed fighting Satan or slaying a dragon, representing the victory of light in overcoming darkness, and in Madeline Montalban’s Order of the Morning Star, Michael is viewed as the planetary regent of the sun.

This is a fitting correspondence for the Nature of the plant, for the Elizabethan physician and herbalist Nicholas Culpeper calls angelica an “herb of the Sun in Leo” and recommends that it be gathered when the sun in in this sign (late July into early August), with the moon positively aspected, during the hour of Jupiter or the Sun. If you want to harvest it yourself and follow his suggestions, you can check the farmers almanac or lunarium, just make sure you’re not harvesting it’s similar looking extremely poisonous cousins, the hemlocks (the genuses Cicuta and Conium).

The sun in Leo tells a good deal about the Nature of angelica and it’s magical and medicinal action. Leo rules the heart, and through this association angelica is thought to strengthen the heart. This is the original purpose of the alcoholic potions called cordials, and indeed angelica is an ingredient in a number of medicinal liquors–Benedictine, Chartreuse, and Dubonnet among others. As one would expect from solar herbs, these tonics are warming to the body and help digestion.

Herbs of the sun are used to counteract maladies of the great malefic Saturn: melancholy, lethargy, poison, and maleficia. Key actions for these type of herbs are that they’re warming and restorative to the vital forces. In the past, they were also thought to allow a person to resist poison. In keeping with this, angelica is used in works of ritual purification and removing maleficia (also called uncrossing).

Through it’s association with another Archangel, Gabriel, angelica also gets an entirely different set of magical associations in hoodoo. Gabriel is the archangel who announced Mary’s divine pregnancy, and angelica’s use in hoodoo to increase female power in the home and in magics for the protection of women and blessing of children is reflective of this relationship. Interestingly enough, the chinese angelica (Angelica sinensis) also called dong quai has been used in Eastern medicine since about 2000BC and has shown to affect estrogen levels and other hormones; many people today use it to control menstrual pain and premenstrual and menopausal symptoms.

Because the dried root is rather large and hard, angelica is a good plant for the creation of carved fetishes, especially those that are to house helpful or protective spirits. The root may either be dug up, gently carved, and replanted to grow into it’s new form (much like a mandrake) or simply dried and carved after harvesting. These fetishes, once enlivened and enspirited, are used to bless and protect, and these products of the witches art are suitable gifts given to bless and protect new homes and new babies.

I offer one final note on the magical use of angelica. In Viridarium Umbris, Daniel Schulke also mentions that angelica is a plant that is powerful in summoning spirits. He recommends using the smoldering root as an offering to attract and add force to works that summon spirits, especially those of a celestial or angelic nature. Because one of the inspiring currents of Cultus Sabbati is the Society of the Horseman’s word, I have a guess that the source of this lore may be due to Angelica’s power to draw and calm horses in addition to the more widely known angelic lore. 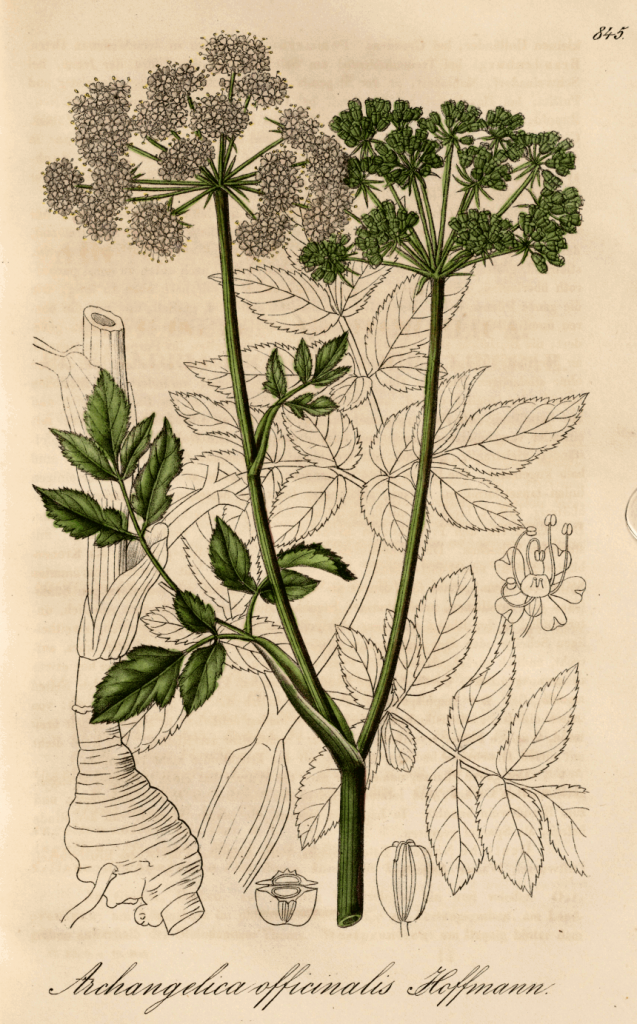