Though it’s generally preferable to grow plants for magic yourself, or buy them from reputable merchants who do so (organically, sustainably, and ethically), there are occasions when one needs to turn to the wild. This could be because the plant you need isn’t in commerce or is very difficult to find. Often it’s because you want something partaking of the essence of a particular location; plants that have grown in certain sites are part of the spiritual ecology of that place. Sometimes it may be that you want to ensure that proper harvesting protocol is adhered to, or that harvesting occurs under certain astronomical conditions. In many cases, the procurement of plant material from the land of wandering becomes a magical-religious rite in itself.

The hunt for ginseng in the traditional practice of the Appalachians is one good example– the root and the hunter both involved in a relationship in the wooded hollows. In this case, because the plant has been harvested by one’s own hand, one can be assured that no poaching has occurred, the roots were not over-harvested from particular patches, and that the ripened fruits of the plant were replanted by the hand that gathered it. Additionally, in this way, the root carries potency and virtue, because it recognizes the sorcerer in a relationship of mutual respect.

This mutual respect is essential for the practice of magical herbalism, regardless of the species sought and worked with. Here are my thoughts, suggestions, and guidelines (both practical and esoteric) when seeking and harvesting plants from the wild.

Preparation:
The first step in wild harvesting is preparation, which involves both mental and physical components. Like all works of magic, having a clear intent is necessary.

For the mental preparation, make sure you know the plant and are sure of its identity. What is the extant lore about it’s Nature? Are there harvesting taboos, and does it have preferred offerings? Lore provides knowledge from our ancestors and we should take advantage of it. Practically, make sure you can recognize the plant in the wild and know about its ecology so you have an idea of where it can be found. Harvesting the wrong plant is needlessly wasteful and disrespectful, and can also be dangerous. Is the plant you’re wanting to collect threatened, endangered or sensitive? Is it overharvested? Introduced or native to your bioregion? How much material do you need and are you collecting leaf, flower, fruit, bark, root? Plan to collect far away from human habitation. This helps to avoid obnoxious people intruding on your magical outing as well as avoiding plants tainted by heavy metals and pollutants and spirits twisted by human development.

The physical part of preparation mostly involves purity. Like draws like, as above so below, as within so without–these are maxims of the art magical. You don’t need to attract negative wights and sprites, nor should you take your aetheric baggage into hallowed ground, so purity of the physical and the aetheric bodies is important. Take a saltwater bath, cense with a purification blend. Some traditions dictate that you should lightly fast and abstain from sexual activity for a period before-hand; in many ways, these are gestures of devotion and respect. Practically, make sure you have clean tools and clean boots to avoid tracking fungal spores, pathogens, and microbial contaminants from one place to another and infecting the plants and the landscape from which you’re harvesting. Wipe tools and boots both with high proof alcohol. Additionally, because this is a magical rite, take your power with you. I don’t mean that you should wear a crushed velvet cloak and all your magical bling, but anointing oil, discreet amulets, and sigils of power drawn on the skin all are useful. You’re a sorcerer engaged in a relationship with the living spirits of the land.

On the Journey:
Again, remembering that this is a magical rite, be present fully in what you’re doing. When you’re journeying forth into a place, you should become fully present as a part of that place, otherwise one is an intruder. Silence and a observant, focused mind are tools as imporant as a sharpened pair of hand pruners.

Knowing the land is essential. If you’re unfamiliar with the location, you should scout the place first, noting impressions from plant communities and the genius loci. Your intent should be spoken humbly to the spirits of place, and you should take an honest read of the place, notice signs, and/or use divination to ascertain their reply. Offended landwights and unheeded omens tend to mean bad things for sorcerers and witches: poison ivy, stinging nettles, bothersome insects, treacherous ground and getting lost at the least. Elf-shot, blasted luck, and attached spirits are also within their power.

On Arrival:
This is the obviously magical part of the trip. The plant in question should be hailed with an invocation and offerings given. There are many such examples of how this is done in published folklore. I’ve given some examples in the posts on mugwort and vervain. A further example may be found in Grimm’s Teutonic Mythology:

‘Our forefathers also held the Ellhorn [black elderberry (Sambucus nigra)] holy wherefore whoever need to hew it down (or cut its branches) has first to make request “Lady Ellhorn, give me some of thy wood and I will give thee some of mine when it grows in the forest” – the which, with partly bended knees, bare head and folded arms was ordinarily done, as I myself have often seen and heard in my younger years.’

If there’s no extant lore on how to do this, devise your own rites along these lines. Give offerings– though some plants have stated preferences (blood, sexual fluids, wine, etc.), honey and incense are good standby’s. We have a standard incense offering we use; I’ll share the recipe in a later post.

Harvesting:
Have the proper tools for the job. One of my personal pet peeves is this whole business of the taboo against iron and steel. The Good Neighbors’ avoidance of cold iron is well known and bandied about in magical circles and urban fantasy novels alike. However, modern tool production has given us the ability to have finely honed precise blades of stainless steel for the harvesting of wood, herb and root. Gold, silver, or copper sickles and knives are unweildy and do not hold an edge. A wooden blade is just clubbing the plant into submission. Much like surgery on humans or cats, harvesting from plants should be done with a precise, clean cut. Modern horticulture tools like hand pruners have been designed to cause minimal damage to plants, and stainless steel involves other metals besides iron to render it incorruptible. Invest in proper tools and consecrate them to your work.

Be aware of the health of the environment. If the plants are stressed due to drought or other disturbance, don’t harvest them. Plants change their chemistry in response to stresses like drought and insect and pathogen attack, and you should avoid them. Additionally it will increase the likelihood of the plants surviving for you to harvest later if you aren’t cutting bits off.

Take lateral branches, not leaders. Avoid injuring bark of trees overmuch, as this will result in a slow death. If you need to collect bark, take from newly downed trees or from small areas on random branches. To avoid over harvesting any one population, move around collecting only a small amount of plant material from any one population. Leave healthy seed producing plants in the population to reproduce. Leave the portions you’re not harvesting at the site; that biomass represents nutrients for the rest of the ecosystem, food and habitat for wildlife, and genetic material for the population of plants. Don’t harvest more than you need or can store properly over the next year. Some good numbers to follow for harvesting amounts at a single location are given by Daniel Schulke in Ars Philtron:

Put the plant parts in clean cloth bags (which can be decorated and charmed as you see fit) and process and dry them properly upon arriving home. 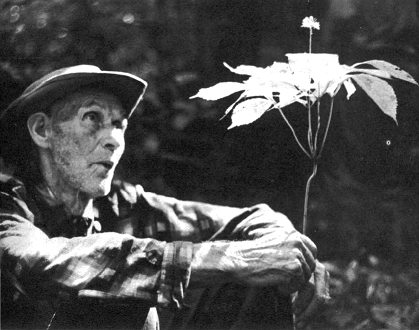 Photo of Harv Reid with Ginseng from Foxfire 1

One thought on “Wild Harvesting”