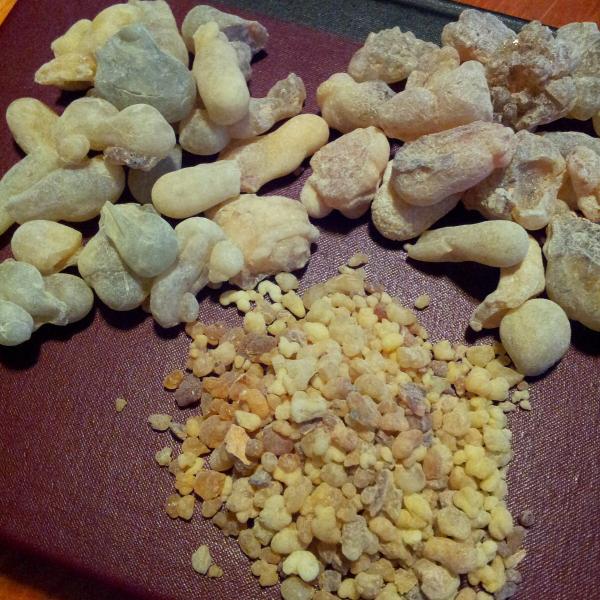 In Isis and Osiris, the historian Plutarch relates that Egyptian priests burned frankincense at dawn, and it's not hard to see why. The scent of frankincense which is fresh, balsam, lemony, and piney is often described as unmistakably solar. Recent research has suggested that a compound found in frankincense causes a sensation of warmth and a feeling of exaltation when inhaled and may help lower anxiety.

Frankincense (also called Olibanum) is one of the oldest documented resins used in magical and religious practice, and has historically used for blessing and devotion, and for drawing good and blessed spirits and expelling the bad. It has been used for millennia in various religions as a temple incense. As mentioned above, it was a sacred incense in Egypt. In Hellenistic Greece, it was called for as the appropriate incense offering in a number of the Orphic Hymns. The Zoroastrians burn it for purification. Frankincense is also an ingredient in Ketoret, the sacred Jewish temple incense blend, and the Catholic and Eastern Orthodox churches use it to fume mass.

We use Frankincense for two main magical purposes: purification and sanctification. Whereas many practitioners like to use sage to cleanse their space and etheric bodies, we find that frankincense performs this better. (Sage is suitable for earthing or grounding forces, but in our experience doesn't really do much to cleanse and purify.) Frankincense also is uplifting to the mind and spirit of the practitioner and helps calm anxiety. It is useful to establish ritual space, promote an atmosphere conducive to magical work, and to aid in meditation and scrying. Frankincense is also an ingredient in a number of blessing spells and formulae.

We carry three grades of Frankincense. Our standard version comes to us from Ethiopia, but is aggregated by merchants there from throughout the Middle East, and likely is a mixture of resins from Ethiopia and Somalia. It is small pea-sized yellow grains. If you have purchased frankincense from us or other shops without any designations, it is likely very similar in quality.

Hojari is exceptional frankincense produced by the trees in the Dhofar region of Oman, from where we directly import ours. The pieces are larger, have a distinct green cast, and have a much higher essential oil content than our standard frankincense. Simply sitting it on a table without even warming will fill a space with frankincense scent. Hojari itself comes in various grades. We offer the two highest that are available to us: Superior and 'Royal', which was sold to us as the resin reserved for the Sultan himself, and, apparently, for shipping to discerning retailers overseas! Objectively, the Royal is a higher grade than the Superior, with lighter, more green pieces, and we have it in very limited supply.

Pro tip: To get the best fragrance from your frankincense you need to make sure it doesn't burn too quickly or too hot. We often use a small oil burner with a tea-light beneath to gently heat higher quality tears. You need a small one where the bowl is quite close to the flame; ours is about 3″ high.