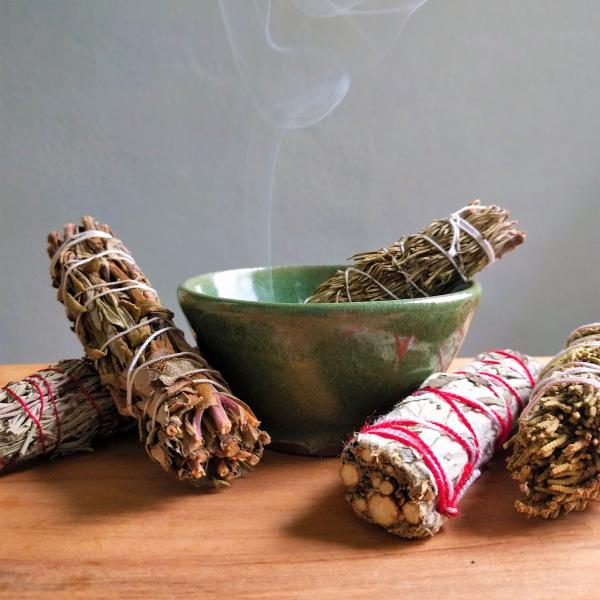 Many Neopagans use white sage (in emulation of the smudging practices of various Native American cultures) to cleanse and purify people and spaces prior to rituals and ceremonies. Though some have criticized smudging as appropriative, the smoke from various herbs has been used for ritual purification in many cultures throughout history.

The Old English word for the practice is reocan "to smoke", which became reken in Middle English; it's where we get the verb "reek". One of our initiating traditions termed herbal bundles used to smolder and smoke 'recels' (pronounced ray'-kels), presumably after this archaic word.

We offer a number of different herbs for your use in your rites. Juniper was one of the more common plants used for this purpose, and folklorists attest its use in Scotland for purification and fumigation in the 1800's. Other strong smelling herbs like rosemary and lavender have also been used.

Though each herb has a somewhat different Nature. they are all useful for purification prior to ritual. Our advice is to experiment to find one that resonates with you, and then use it consistently to build a connection with the spirit of that plant.

An earthing herb popular among English witches for purifying a ritual space.

Ideal for purifying people and spaces prior to divinatory work.

A strong cleansing herb used by the Scots, Appalachians, and several tribes native to the United States on both East and West coasts.

A powerful garden herb used to purify hearth, home, and its occupants.