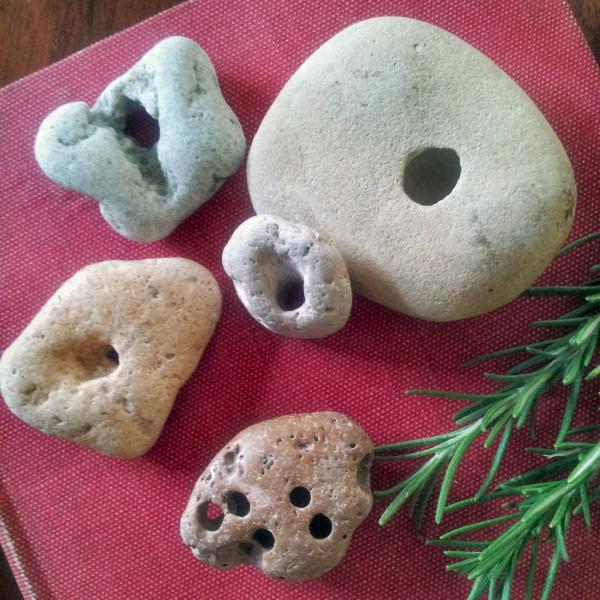 In the worldview of Appalachian folk magic, the otherworld is all around us; we exist in a world inhabited by The Good Neighbors and wee folk, ghosts, demons, angels and all manner of spirits. Following in the footsteps of our old world ancestors, Appalachian folk magic practitioners regard boundary sites like caves, lakes, graveyards, and mountain tops to be places where one can come into contact with the world of spirits. Natural openings or doorways are all believed to form the portals between the worlds. This then, is the general magical essence of a hagstone--a door, shaped by the hand of nature, leading to the otherworld. As such, hagstones are used in all manner of charms and magical operations, of which the following are a few examples.

Holy water
Many practitioners utilize hagstones for the blessing of holy water. Because the stones are created when water wears a hole through the stone's surface over long periods of time, they become infused with the power of water to change and transform. Holed stones are also reflective of the caves and openings in the earth leading to subterranean waters and the deep waters of the underworld. In areas lacking holy wells, water infused with such potency and blessed by the practitioner may be used to great effect in purification and healing spells. Even in Britain where holy wells are present, the taking of holy waters for healing was often coupled with the afflicted person passing through large holed stones or fissures in rock which were located nearby, suggesting a complimentary relationship between the water and the stone.

Hagstones were further employed in Dorset and Devon as protection charms on fishing boats against being "witched", or plagued by evil spirits (who may or may not be under the direction of a witch). This condition would manifest as bad luck, accidents and the inability to catch fish. The protective holey stones were tied either to the start rope, or to nails driven in the bow next to the gunwale, and this practice is documented as occurring well into the mid-1800's.

"In the name of great Saint Peter
And for Saint Blasius' sake,
By this stone I fain would see,
What form the spirits take"

Dreams
Because of their use as protection charms against nightmares and charms to allow one to see into the otherworld, holey stones have come to be especially associated with magical dreaming. For example, the following spell utilizing a holey stone to attain dream travel to the sabbat of the witches was given by Andrew Chumbley in his essay "What is Traditional Craft" published in The Cauldron (No. 81, Lammas 1996):

"For this deed of Arte a leather thread and a hagstone are required; the latter being a stone through which there is a hole naturally worn through: a gateway graven by the hands of the earth and charmed to open by the tongues of the river. Taking the hagstone in one's grasp, one should contemplate its opening and entreat it to be a doorway for your going forth in dreams. One should then take leathern thread and, holding it in one's hands, should phantasise about the ways of the magical night-procession. Consider the spirits. Think of She who flies forth out of the body and into the freedom of the darksome midnight. Ascend with the spirits through the openings of the flesh; take leave of your mortal abode and roam abroad with the unseen companie of the aire. Step upon the wind and lay yourself into the arms of the sky... With each poignant atmosphere of phantasie, knot the thread and thus create a rosary of dreaming potentials. When the thread has seven knots, pass it through the mouth of the hagstone and tie to form a loop through which one's hand may be placed. The stone and thread should be entreated with a final prayer for the spell to work. Then at the end of one's waking day the stone should be held in one's hand (generally the one most seldom used) and the cord wrapped around the wrist. The stone should rest within the hand like a child in its crib. Then I bid you forget about it 'til morning. Perchance in dreaming your spirit shall pass through the stone-mouth and wander abroad in the night-walkers' procession, flying freely to the place that some have called 'Sabbat'. Where-ever the dreaming takes you, the thread of knots shall guide and bring you home, once more to waken at the edge of day."