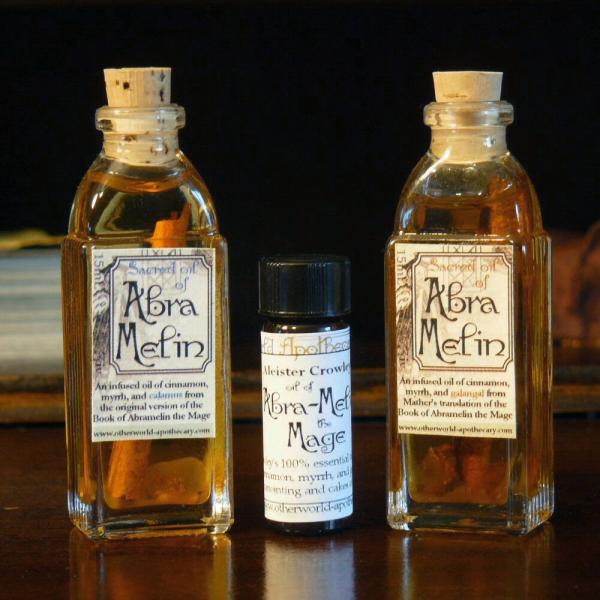 The Oil of AbraMelin is the sacred anointing oil described in the fifteenth century text The Sacred Magic of AbraMelin the Mage by Abraham of Worms. Our oil is the recipe found in S. Liddell MacGregor Mathers' late 19th century English translation, an infused oil of cinnamon, myrrh, and galangal. It is the recipe from which Crowley based his skin-burning essential oil recipe, which we also offer. Our oil, however, is safe for both anointing and consumption in cakes of light, though of course is not as strong as the pure essential oil version.

Mathers made an error during the translation from French and substituted galangal for calamus. Because the Mathers translation is authoritative in the English speaking world, we offer the galangal recipe. However, we also offer the original calamus formula; please be sure to select the one you prefer. Since the galangal and calamus make up such a small part of the recipe, the scents are similar. However they are energetically quite different, with the galangal recipe being fiery and the calamus cooling.

AbraMelin incense, the proper fume of aloeswood, storax, and frankincense (and not of myrrh, cinnamon and galangal sold elsewhere) is also available.