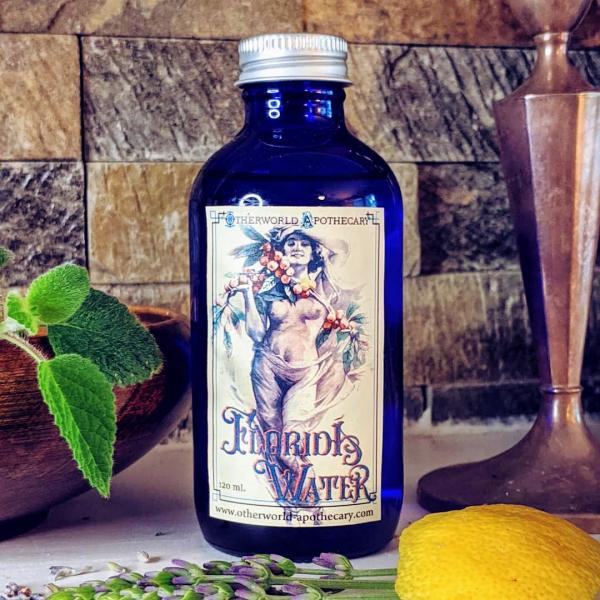 Florida Water is a distinctly American formulation adopted into American magical traditions to purify and cleanse. Florida Water was already part of many Victorian era households at a time when the pursuit of magic and spiritualism was growing in popularity. It likely entered modern magical practice from the innovations of Black American folk magicians. Currently, Florida Water is widely used in a myriad of magical traditions that originated in the Americas, including many African traditional religions, practices from central and South America, eclectic American folk magic, and Hoodoo. The light, cooling, and fleeting scent is employed to make the working space pleasant to the visitations of ancestral spirits and the beloved dead. Additionally, because it was used to cleanse the air from sickness and miasma, it finds use in magical purification.

Originally developed as a magico-medicinal tonic to be drunk for malaise, Florida Water evolved in usage to perfumery (unlike some similar â€˜physicksâ€™ that evolved into cocktail cordials). The formula is a blend of fragrances: English Lavender water, the citrus of Eau de Cologne, and spices like cinnamon and clove. In the early 20th century, preparations such as this were made locally by an independent druggist who would mix it according to set formularies that maintained a culturally accepted standard. Florida water is unisex, and the Victorians had very rigid ideas about what was acceptable for both men and women to wear. The scent should not be either overly floral or musky. In fact, one of the druggist trade magazines at the turn of the century unequivocally states:

Some of the ingredients often seen in formulas and the use of which are to be avoided, are musk, rose, rose geranium, citronella, orris and the floral odors from pomade washings or their synthetic equivalents. The addition of these ... invariably impart a cloying quality or heaviness that effectively kills the refreshing odor that should be a characteristic of a good Florida Water.

The most common current formulation of Florida Water is made using cheap synthetic fragrances. The desire to use real ingredients has inspired many modern magical herbalists to make â€˜their own versionsâ€™; unfortunately, most of these are eclectic mixes of herbs and flowers with no connection to historical formulae. Our Florida Water is the product of extensive research. We collected 54 historical recipes published from 1875 to 1937 and analyzed the ingredients and proportions to create a sort of family tree. This analysis revealed a core recipe with minor variations or additions, for instance the inclusion of spearmint or lemon balm. The blend we offer is as close as possible to the historical Florida Water that would have been widely available in the Victorian era. It is made of pure essential oils blended in clean ethanol, so is safe for all sorts of uses.