“It is better to light a candle than curse the darkness.”

It’s fairly common to hear modern-day magical practitioners mention “burning a candle” for someone who needs help in much the same way Christians will mention praying for someone. Generally the setting of these lights are meant to ease suffering and impart blessing and healing. This sort of work has a long history.

Oil lamps predominated in early Egyptian and Jewish temples wherein they represented the light of the spirit world. Magic lamps are found throughout the Greek Magical Papyri (a collection of spells, formulae, and rituals from 100 BCE – 400 CE Graeco-Roman Egypt), and directions are given for a number of divination, dream, and love spells involving lamps. The Picatrix, an Arabic manuscript on magic and astrology written around 1000 CE, mentions both candles and lamps used for magical and ritual purposes. Torches were specifically associated with certain religious rites in the ancient world and seem to fulfill a magical purpose; for instance instead of specifying an appropriate incense offering, the orphic hymn to Nyx recommends “The Fumigation with Torches”.

During the Roman empire, candles and lamps were often used as part of the religious and magical work itself, being lit as petitions (votives) to the Gods and spirits, particularly by those who were not priests. Early Christians adopted this practice and it continues to flourish in the Roman Catholic church. By the medieval period, beeswax candles had overtaken the popularity of lamps in magic and ritual.

The Renaissance magician Agrippa stresses the importance of candles or lamps in the performance of magic. In his Three Books of the Philosophy of Natural Magic, he postulates that Light originates in the One, diffuses through the three worlds (Divine, Celestial and Material) and is related intimately to the fire within all things. He states:

The Celestial, and bright Fire drives away spirits of darkness; also this our Fire made with wood drives away the same, in as much as it hath an Analogy with, and is the vehiculum of that Superior light; as also of him, who saith, “I am the Light of the World”, which is true Fire, the Father of lights, from whom every good thing that is given comes; sending forth the light of his Fire, and communicating it first to the Sun, and the rest of the Celestial bodies, and by these, as by mediating instruments conveying that light into our Fire. As therefore the spirits of darkness are stronger in the dark: so good spirits, which are Angels of Light, are augmented, not only by that light, which is Divine, of the Sun, and Celestial, but also by the light of our common Fire. Hence it was that the first, and most wise institutors of Religions, and Ceremonies ordained, that Prayers, Singings, and all manner of Divine Worships whatsoever should not be performed without lighted Candles, or Torches. (Hence also was that significant saying of Pythagoras. Do not speak of God without a Light.)

As time went on, more and more of the magical actions associated with a working were fulfilled by the candles originally used in the work to bring and augment the power of good spirits. By 1913, A.E. Waite described ceremonial magic workings using candles with color correspondences, placement, and planetary and angelic sigils carved on them for specific purposes. Sigils and charms which would have been written out on paper or parchment began to be carved into candles or placed around the glass of novena candles. With the discovery and growth in availability of paraffin and aniline dyes, color symbolism started being incorporated into the candles as well. With Henri Gamache’s publication of The Master Book of Candle Burning in 1942, describing a Protestant variation of the types of candle burning already popular within the African diasporic traditions, elaborate candle burning rituals were cemented into modern folk magic.

Today, candles of pure beeswax or colored paraffin in various sizes and shapes are carved with sigils of magical intent, anointed with scented oils, and dressed with herbs and minerals to be burned alone as a complete spell or incorporated into a complex magical working. Novenas — candles lasting several days — are used to petition saints, angels, and archons. Additionally, candles may be used as devotional sacrifices for spirits. The power of candle magic to fuel a spell or feed spirits comes from the consumption of the wax and transformation into light; using the candle this way substitutes the wax for your own energy. The appropriate signs and symbols, herbs and oils focus the process, harnessing the energy released by the flame to a specific end. 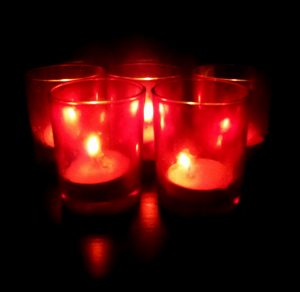